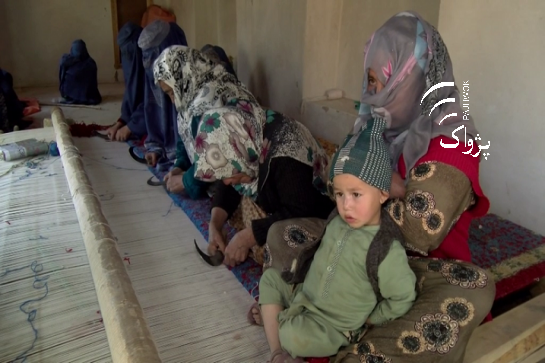 SHIBERGHAN (Pajhwok): A 35-years-old woman who lost her husband and two brothers to the war in northern Jawzjan province says the pain she suffered is shared by thousands of other Afghan women.
The woman, Nazifa, is a resident of Sardara village of Darzab district. Nazifa led a normal life four years ago with her spouse and five children including two of her own, but then she lost her husband, two brothers and wife of one of her brothers.
Talking to Pajhwok Afghan News, she said, “My husband was a shepherd and we had a happy life though had no much money.”
The beginning of misfortune:
While begging along with her five-year-old son on Shiberghan streets, Nazifa said she lost five of her family members -- husband, two brothers and a brother’s wife in militant attacks.
Wearing a silver-colored but a dirty Burqa, she said, “My husband was innocent and a calm person, he did not harm anyone.”
As tears rolled down on her cheeks while telling her story, she added, “Our happy life was destroyed three years ago when my husband was captured while grazing animals in our village by militants, they killed him very brutally.”
“Local people who witnessed the incident told me that the militants were telling my husband that he is from the family of an Afghan Local Police (ALP) member and he is a spy before they killed him,” Nazifa said.
As she could hardly talk, cleaning her tears with a corner of her Burqa, she said, “My two brothers who were fighting against the militants and a brother’s wife were also killed by militants in Sardara district of Darzab district two years ago.”
Nazifa said her two brothers and her brother’s wife were killed by Daesh or Islamic State (IS) militants. “They did not stop after killing my brothers, they burned their bodies in front of me after shooting them dead,” she continued.
Nazifa begs to feed her three children and two nephews. She said arrived in Shiberghan after losing four family members. She, her children and two nephews live in an old house that has no windows and doors.
The woman said that thousands of other Afghan women were in similar situation like her due to the ongoing war in the country. She said they received government assistance twice since coming to Shiberghan city.
“I am obliged to go door to door, people give me some food and money, but I return empty-handed,” Nazifa added. She said her only hope in life was the five children she was living with.
She also mentioned hundreds of other women and children who were begging in the city and said, “They all are victims of war. What future awaits these innocent children?”
Nazifa’s request to warring sides:
Nazifa said all Afghan people were tired of war and destructions and the warring sides should follow the way of peace and negotiations and put the killing of people to an end. She concluded with repeatedly saying “war only brings misfortunes”.