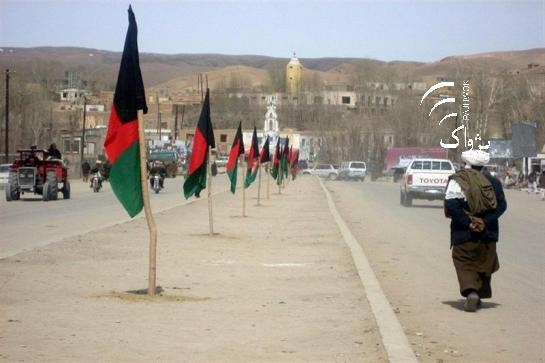 FEROZKOH (Pajhwok): Security on the Kabul-Ghor highway has improved after the resolution of a tribal dispute in the Dawlatyar district of the western province, say residents, who are happy with government efforts to resolve local tiffs before they lead to clashes and tensions.
Inhabitants of the district acknowledge difference among tribes and individuals have been reduced significantly as a result of the government’s effective peace strategy. As a result, the security environment in Dawlatyar, particularly on the busy route, has seen a marked improvement.
Ghor tribal elders recently joined hands with the governor’s office to bring about reconciliation between the tribes, which had clashed several times in the past two years. The tribal clashes in Dawlatyar caused casualties on the one hand and sparked tensions on the other.
Government officials, elders and civil society activists cite awareness among the people, their willingness to play a proactive part in dispute resolution and popular aversion to fatuous squabbles as key factors behind a decline in violence. This has also translated in social cohesion.
For the past two years, local councils have been functional in different parts of the province, including Dawlatyar. The councils have been able to negotiate an amicable end to deadly feuds, officials claim, commending the tribal elders for their untiring efforts to help improve security on the highway.
In the Shinya area of the district, illegal taxes and the abduction of a woman touched off a feud between two tribes. But intervention from social workers and pro-peace elders came to fruition with the resolution of the two-year-old dispute, authorities say.
Eruption of the dispute:
A resident of Shinya village, Asif says: “Different tribes are living in Dawlatyar, where a woman from Zihussain tribe was abducted by a young man, who belonged to Taimani clan.” The incident provoked Zihussain men to form an armed front against the rival clan.
The Taimanis subsequently asked Khushk tribesmen, living close to the Ghor-Kabul highway in Dawlatyar, for financial support and gunmen. Their demand drew a positive response. “The tensions took a toll on security in our village and adjoining areas, so much so that the highway also became insecure,” the resident adds.
As the Zihussain men took up arms, a youngster named Shahryar was gunned down. This last spring, Mullah Juma Khan -- an elder from Khushk tribe -- was wounded during an attack in Shinya Bazaar. The assault was followed by a series of clashes between the two sides, Asif recalls.
Forty days ago, Zihussain gunmen injured a woman and three children during a night-time assault on the Khushk village. Additionally, several wheat fields were set alight, inflicting losses on farmers just ahead of the threshing season. The incident prompted clerics and influential figures to launch fence-mending efforts between the two sides. With the feud settled, he says, the situation has returned to normal.
People Councils’ intervention:
Maulvi Wali, administrative officer for Dawlatyar and noted cleric, says: “Looking at the sentiments of youth on both sides, I decided to intervene between the tribes. Any delay could have resulted in casualties to the parties as well as passengers travelling the highway.”
Widely respected for his social work, Wali met area residents and elders on how to deal with the issue. After marathon discussions, they convinced the tribes into striking a patch-up. Now passengers and both sides, who previously blocked the road frequently, feel secure.
Wali says: “Presently, the tribes are living in a peaceful and cordial atmosphere. They are doing business in the main bazaar, something that previously looked impossible. A continued enmity would have spawned more problems.”
Another resident of the province, Mohammad Nabi, calls tribal differences in Ghor a serious challenge that has concerned people besides vitiating the security situation. “Both tribes were equipped with weapons and traded fire on the highway on a daily basis, creating problems for commuters.”
Men from the tribes would wield guns while doing routine things. At night, they guarded their areas, according to Nabi, who says passengers were also bothered more often than not. A number of individuals were wounded in at least three major clashes, including rocket strikes, between the tribes.
Finally, the area people ran out of patience. Elders and district administration officials obtained guarantees from the warring sides -- a development that paved the ground for the settlement. Nabi says representatives of both parties assured the mediators of ending their hostilities for good. They also exchanged invitations to meals.
Mohammad Wazir Noorani, civil society activist, agrees: “The settlement between these tribes has had a propitious effect on the Ghor-Kabul highway security.” But the presence of 10,000 illegal gunmen belonging to 132 different groups in the province is a grave concern, he complains.
Each group has set up a parallel government, he alleges, saying civilians are suffering due to frequent clashes among these outfits. Some families have been forced into migrating from the district.
At least 270 civilians have been killed and wounded in such firefights, with hundreds of families shifting to Ferozkoh and Herat City, he adds. “Security enforcement will remain a distant dream as long as these groups are not disarmed and differences not resolved at the local level.”
Provincial authorities estimate 6,000 gunmen from 130 groups operated in Ghor until two years ago. But now 4,500 irresponsible gunmen belonging to 103 outfits are active in the province, they claim, linking the decrease to the government’s stronger writ.