‘War will end if Taliban, govt honestly want so’ 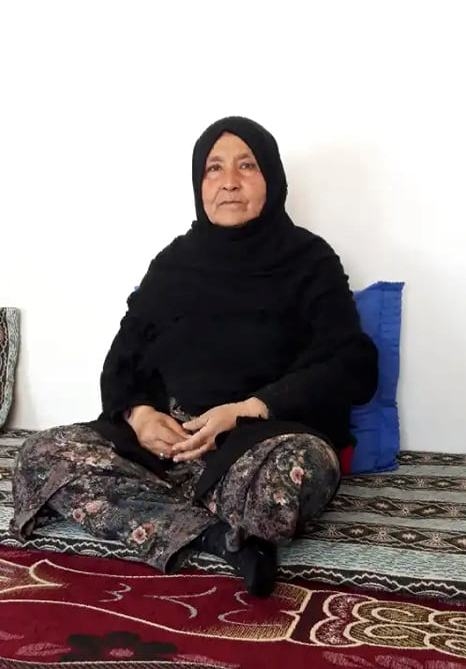 NEILI (Pajhwok): An elderly woman in central Daikundi province lost her husband and her only brother to the decades-old war in Afghanistan 24 years ago. She believes the conflict could come to an end if the government and the Taliban honestly want so. Roshan Ekhtiari, 63, is a resident of Neili city, the capital of Daikundi. She has mediated and resolved many disputes in her area besides advocating for justice and peace. While sharing her stories with Pajhwok Afghan News, Ekhtiari said that she had been active since last 16 years advocating for peace, resolving disputes and encouraging women towards social activities in Daikundi province. She is one of the women who has been severely affected by the war that is still ongoing in the country. “I lost my husband and only brother in the civil war 24 years ago and since have been looking after my 10 children. I went through many hardships growing up all of

them,” she said. Ekhtiari cannot read or write but she tried her best to assist her children to get education as many of them have received bachelor’s degrees. As she recalled the bitter stories of her life during war, tears rolled down her face. “It is not only me that faced the bitterness of war. After becoming widow, took care of my children myself, unfortunately thousands of Afghan women had gone through such miserable experiences, many fathers and mothers lost their children and millions of children were orphaned and led an unfortunate life.” Ekhtiari said people from all sides killed and maimed in the ongoing war were Afghans and the ongoing conflict had lost its meaning. As an expert in resolving local disputes, Ekhtiari said that one of the main reasons of the ongoing war in Afghanistan was not accepting each other. Addressing the insurgent groups fighting against the government, she said, “One brother fights another in our country since more than four decades, they kill each other, this should be stopped, anyone being killed is our child and brother and the blood that is shed in war is the blood of Afghans.” She said that the role of mothers and Afghan women in general in resolving the current crisis was important. Afghan women on both sides (Taliban and government) should get united and stop their children, spouses and brothers from taking weapons and fighting each other, she added. “The pain of this war and destruction is tested by all mothers, sisters and people in this country, I am never a supporter of war and violence, I think it is the time for us (women) on both sides, whether it is Taliban, government or others, to get united and control our men,” Ekhtiari stressed. As a mediator of disputes, she said she was able to resolve many cases that could divide families and grow hostilities in the capital and districts of Daikundi province. She believes that the Afghan women who have given huge sacrifices in the ongoing war could help become mediators on both sides of the conflict and put end to the decades-long violence. About her interest in becoming a mediator, she said, “My father was a tribal elder and a good mediator, when I was a young girl, I would accompany him in resolving disputes, all the people would praise my father as a hero for his role in resolving disputes, they would kiss his hands in respect, I would feel proud that my father was a hero who could resolve many problems of people, when I grew up, I thought I should follow the path of my father.” Ekhtiari said she had been able to resolve a hundred domestic disputes and social issues so far. Besides that, she also encouraged many women for social and economic activities and illegal armed men to put down their weapons and stop opposition to the government. She talked about a number of armed men who stopped insurgency in Khadir and Ashtarli districts after she convinced them. “The governor’s house facilitated my trips to Khadir and Ashtarli districts, I convinced a number of irresponsible armed men in the districts to lay down their weapons and stop opposition to the government.” About the peace process, Ekhtiari said the peace agreement between the US and Taliban and the ongoing peace negotiations were great steps for resolving the country’s conflict and said her hopes for peace raised with developments in negotiations. However, she expressed her concern over the continued violence and stalled talks and said, “The two negotiating sides are yet to feel the pain of their people, if they had so they would have declared a ceasefire, ended violence and we would have a significant breakthrough in talks.” She said no one would win with the continuation of war and the warring sides should pay heed to the demands of Afghans and declare a truce as soon as possible. “I as a mother call on both sides that continuation of war will cause destructions only and we will ultimately reach a time when most of our population would be women, elderly men or children, the continuation of war has very bad consequences, all should know about it,” she said. While cleaning her tears with a corner of her scarf, the mother said, “I as an elderly mother beg both the government and Taliban to agree on peace and stop the war.” Residents of Neili city praise services of Ekhtiari and say all women should work like her for reduction of violence which would help ensure peace in society.

Farzana, 36, a resident of Neili city, said her husband’s family was oppressing her because she had no baby boy and her husband even wanted to divorce her. She said that Roshan Ekhtiari mediated her case and her husband withdrew from his decision of divorcing her and now they lived a peaceful life. She thanked Ekhtiari for her help in her case. Hamidullah, a resident of Kiti district of Daikundi province, who was loyal to an illegal commander fighting against the government in the district, was encouraged by Ekhtiari and he stopped insurgency. This man thanked the woman and said, “When I had the weapon, I would feel arrogant and strong, but I never thought that my activities are against the law and dangerous.” “Mother Ekhtiari told me that my activity had no good consequences, and I was engaged in illegal activities, she told me to lay down my weapon and start a normal and dignified life. I did not accept, thinking that the weapon is my to have many things,” he said. “But I was wrong. I thought and asked myself why Ekhtiari is encouraging me to start a normal life despite it does not benefit her, then I decided to stop insurgency and started selling Bolani in the city, now I have a good life,” Hamidullah added. Mds/ma