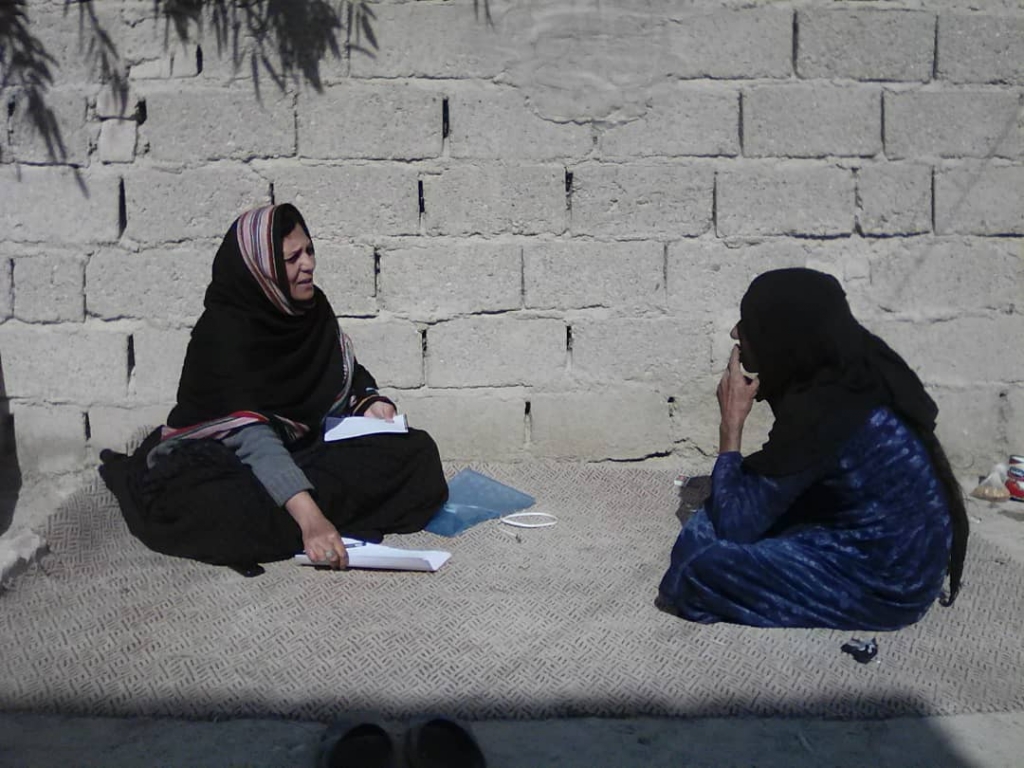 ZARANJ (Pajhwok): A 52-year-old resident who has resolved more than 600 disputes in Nimroz province in the past 20 years says, if given the opportunity, she will talk to female rebels in insurgent-controlled areas.

Through negotiations with women militants, she wants to encourage their men renounce the insurgency and embrace peace.

Shah Gul Gulzada, a resident of Zaranj, the provincial capital, before studying midwifery, graduated from the 12th grade.

In addition to social activities, like the provision of health services and teaching, Gulzada has been instrumental in sorting out hundreds of issues, such as domestic violence cases, inheritance rifts etc.

Happily married with five sons and four daughters, she enjoys her family life to the hilt. The quinquagenarian views conjugal acceptance and forgiveness the secret of a prosperous and peaceful life between her and her spouse.

Working as a midwife in her area for several years, she told Pajhwok Afghan News: “Women would tell stories of hardships during childbirth. They often tell me about different types of violence. That bothers me a lot,

“I wonder how I could rid them of their problems. Slowly and steadily, I started from one house — two families living there. The positive outcome of this work gave me the spirit that I should work day and night in this area.”

She went on to say: “Now I’m so happy having solved hundreds of such cases and saved many families from the agony of separation.”

Regarding skepticism about female abilities and talent, she remarked: “Over the past 20 years, the resolution of various disputes and 620 cases of domestic violence has proved the strength and capability of the Afghan woman.”

Commenting on her activities, she explained: “I have addressed small family squabbles such as disputes between mothers-in-law and daughters-in-law, differences between spouses, inheritance tiffs.”

Gulzada continued she had also resolved problems the distribution of irrigation water and land – knotty issues that could cause deaths and injuries.

Gulzada claimed having been able to sort out even major local disputes with the help of Allah.

Every step she has taken to resolve people’s problems and achieve positive results, adds to her energy and capacity.

For instance, she cited a case that she resolved: “In 2011, there was a dispute over the distribution of water between the residents of Gul Bacha and Dara Shak villages in the Kang district of Nimroz.

“The situation was so grave that people hit each other with spades and axes. Several villagers were injured and so much so that they abused each other’s married women. If the conundrum had been allowed to linger on, there would have been be deaths and injuries.”

The woman recalled: “I went to the district with the help of some tribal leaders and talked to some elders from both sides.

“Our meetings lasted several days until I convinced both sides to stop quarrelling and solving the problem. At last, the dispute was settled and I distributed water fairly between them.”

Gulzada said: “I’m so happy having dealt with such cases and this happiness always enables me to resolve more of such cases. This saves not only the men of the family from being killed, but also helps met prevent murders.”

Gulzada characterised mediation as effective but at the same time it was a difficult task. Real mediation could be the best tool of settling major cases and ending years of conflict in the country.

She believes like men, women also want to work as mediators between the government and the Taliban and encourage both sides to agree on peace and ceasefire.

The woman says she has the courage, if facilitated, to travel to areas under Taliban’s control and talk to women of Taliban and encourage them to convince their husbands to stop violence.

Gulzada told Pajhwok she has the experience of talking to the Taliban and had been able to resolve huge differences among people in the province.

“Some years back, the Taliban banned girls from going to school in a district of Nimroz. I went to that district for healthcare related services and during my job I talked to a Taliban commander and gained his permission for the hundreds of girls to resume going to their school.”

For this achievement, she recalled, the Peace and Security Institute and the High Council awarded her appreciation letters.

She said every Afghan was hoping for peace because all the Afghans, including the Taliban, were tired of the conflict and killing each other and if both sides made realistic efforts, peace would definitely come.

Gulzada, who carries in her mind many painful stories of residents of rural areas, said: “The Taliban are also the sons of the soil, they should be listened to, they have also pains in their hearts, if their voices are heard and real talks are conducted with them, they would certainly reconcile.”

She believes peace could be achieved in the country if efforts are made on national level and all people, including women, practically work in this regard.

“If the real meaning of peace is understood, peace means I don’t want violence and I love my people and country, then peace is unavoidable. I believe everyone should work to the best of their ability for peace on family, village, district and national levels.”

She said she was ready to go to Taliban-controlled areas and work peace. “If I go to the women of Taliban, I will tell them to stop your men from violence which has rendered many women widowed and many children orphaned and on both sides only the Afghans are killed, so just stop it.”

Gulzada claimed during the provision of health services and civic activities she talked with the Taliban mothers, sisters and wives and if she gets the same opportunity again she is ready to talks to them again because women in Nimroz trusted her.

“Besides the introduction I have with the people during my service and the links I have developed with the people of Nimroz, Dilaram, Bakwa and Khashrud, I want to talk with other women of our society as well as with more Taliban’s mothers, sisters and wives.”

Mrs. Gulzada, leads the Pishgam Women Social Association (PWSA) in Nimroz, the organization has 200 women members. “Being a mother, I want to share views with the Taliban mothers, wives and talk about peace with them in order to pave the way for peace, convince one another and reach to peace process.”

Gulzada is also a poet and she has written some poetic verses about peace.

Optimistic about the outcome of the ongoing peace talks in Qatar, she said as a mother and sister she wanted the Taliban and the government to feel the pain of widows, orphans, disabled and martyrs and shun their differences and end the 40-year-old conflict that has affected women the most.

Zarghona, a resident of Gula Bacha village in Kang district, said: “Gulazada’s activities are praiseworthy. She has been able to resolve many disputes including a big one on water distribution among people.” She also said mediation was the best way to achieve peace in the country.

Civil society activist in Nimroz Fareshta Sherzad said Gulzada spent many years of her life resolving disputes among people and did so without a reward in return. Her efforts for peace were valuable, Sherzad said of Gulzada.

“Gulzada has proved that women can also work as peace ambassadors and play a positive role for peace and stability.”