‘My father would have been alive if there was no conflict’ 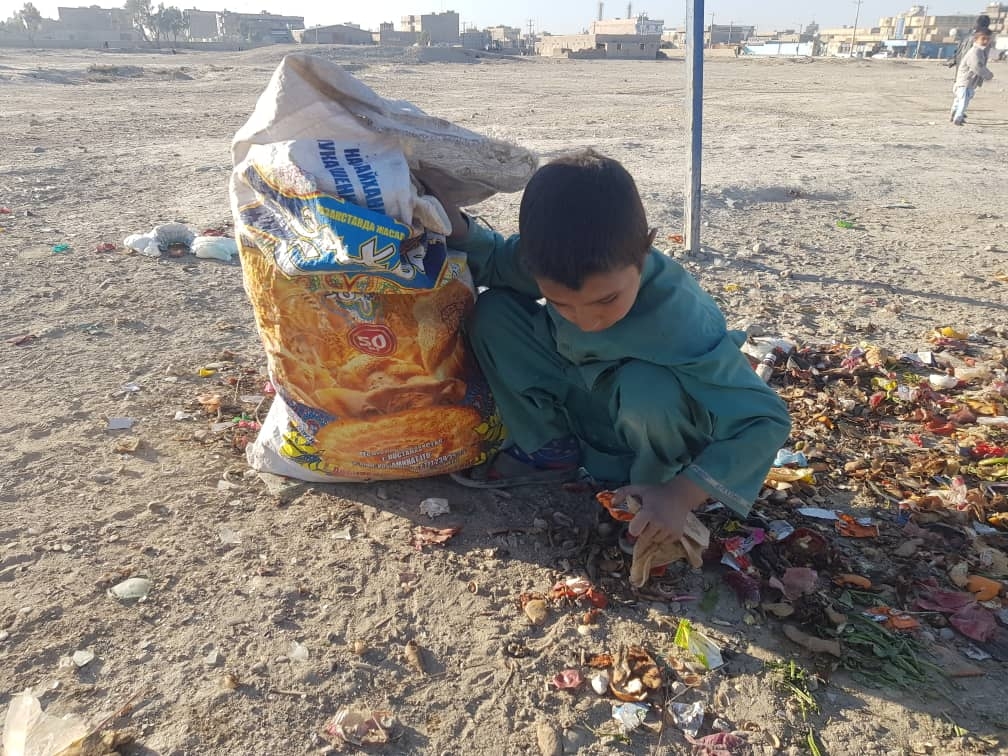 ZARANJ (Pajhwok): A 12-year-old boy, who collects reusable things from rubbish piles in northwestern Nimroz province, is hopeful he will resume school for a better future if lasting peace is achieved in the country.
The teenager, Hamidullah, a resident of Bluwar Sulh area of Zaranj City, carries a sack on his shoulder every morning and walks the city streets to collect scrap metal, plastic and paper to deal with his economic problems.
A Pajhwok reporter interviewed the child when he was standing on a rubbish heap in search of items that can earn him some money.
Hamidullah, while scavenging, told Pajhwok: “My father was killed in the conflict, my mother is ill, my brother is learning tailoring and I collect plastic bottles, scraps of paper and other usable things and sell them.”
He earns between 50 to 60 afghanis a day by selling junk scavenged from rubbish bins and buys and takes home breads every evening.
Hamidullah, whose father, an Afghan National Police (ANP) officer, was killed in a battle with the Taliban two years ago. He now lives in a rented house with his mother, two brothers and a sister.
Children wear warm clothing to be protected from severe cold weather, but Hamidullah wore very delicate clothes.
“I use the same rubbish to warm up my house and burn them in the heater,” said Hamidullah, whose hands were red due to cold weather.
Like other children, the boy also wished to study, dress well and have a good life, but after the death of his father, all these hopes were shattered and now his only happiness is to eke out a living.
The difficult life has turned Hamidullah mature ahead of time and he thinks how to avoid a dark future and find a way to a brighter future.
The uneducated child, while talking to the Pajhwok reporter, was starring at school children with bags on their backs until they entered the school.
“Why not, my father enrolled me in a school and said I will become a good pilot, I asked him what is a pilot, he said the person who flies airplanes,” Hamidullah recalled, while responding to a question that if he was eager to go to school like other boys.
He said his mother was also interested in education of his brothers and sister, but economic problems prevented her from fulfilling her wishes.
According to him as long as his father was alive, they had a good life. He and his 14-year-old brother would not work and they study. But after his father’s death, he was forced to leave school and work to make a living.
Hamidullah cited his father’s death as the only cause of his family’s misery and said: “If there was no conflict, my father would not have been killed.”
To a question if what if peace comes, he said: “My mother says peace is good. The conflict killed my father, I wish I could see peace.”
Hamidullah said he had never fought with boys of his age and he becomes up-set on seeing other people fight and he tries to stop them.
He said if the conflict was stopped, no child would become fatherless like him. When asked about his plans if peace arrives, Hamidullah, said, “If peace comes, I will not collect garbage and will go to school like other children with clean hands.”
“They (the government and Taliban) should make peace and make mine and other children’s lives prosperous. It will prevent children becoming fatherless and homeless like me,” he responded when asked if he supports peace between the government and Taliban.
The child from Nimroz said he if the local government paved the way for his, his brother and sister’s education, they were ready to go to school and fulfill the only wish with of their parents.
Hamidullah called on local officials in Zaranj to provide education for orphans, so they were not deprived of education.
The mother of Hamidullah, who declined to be named or captured on the camera, expressed her concern about Hamidullah’s uncertain future and health as he collected filth every day.
She said her husband was killed while defending the country but the government was unaware of his orphans and never addressed their problems.
“Sometimes we are hungry for days or have enough food, I forced Hamidullah and Rahimullah to work but I’m very much upset that they cannot go to school,” she said.
The aggrieved mother says the only cure for her and all widowed mothers and orphans was lasting peace in Afghanistan.
Hamidullah’s mother is concerned about the future of the country’s children but hopes that peace talks between the Taliban and government would yield positive outcome.
As a grieving mother, she called on the warring parties to do more to heal the wounds of thousands of mothers, sisters and children.