KANDAHAR CITY (Pajhwok): A widow from southern Kandahar province says the ongoing conflict has taken away all her happiness, but she continues to hope for a better future.

While eagerly awaiting the glad tidings of peace in her benighted homeland, she wants the warring parties to put an end to more than four decades of hostilities and thereby contribute to the cause of peace.

Halima, 50, lives in a tottering house in limits of the 3rd police district of Kandahar City. She has a widowed daughter, three sons -- aged between 11 to 15 -- and two daughters.

Halima, operating a sewing machine, told Pajhwok Afghan News they did not need support from anyone as long as her husband and son were alive. But the war abruptly brought a devastating change to her life.

After losing her young son to the conflict four years ago, the woebegone woman recalled, her life was plunged into darkness and she now spent the night for sunshine. 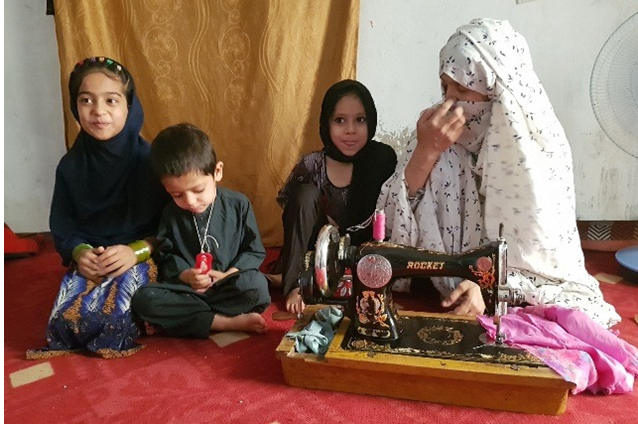 Having become pale and frail as a result of the heavy responsibility that has fallen on her weak shoulders, Halima referred to the killing of her young son in a landmine blast.

“My son was serving as a member of the border police in the Shorabak district of Kandahar, where a roadside bomb killed him along with four other colleagues,” the woman informed.

She said the death of her son left the entire family shell-shocked. His grieving father, keeping a tea shop in the city, started suffering from multiple ailments. However, he continued working despite his failing health.

Last year, Halima said, her ailing husband died of a heart attack. His demise added to the family’s woes and privations, she added.

But she did not lose hope to the massive shocks, the courageous woman maintained. In an extremely trying situation, she shouldered the responsibility of looking after her children -- fingers crossed for a peaceful future.

She has started tailoring to feed her children and meet their demands. “It’s very difficult when you have no men at home. I play the role of a mother as well as a father. Besides household works, I bring goods from bazaar.”

She has three sons 15, 13 and 11 years old who work with mechanic, toiler and carpenter, each receiving 100 afghanis per week.

Halima said 100 afghanis a week could not meet her home’s needs but she wanted to see her children learn certain profession and work.

She said her children not only worked but they also went to school. “My hopes are connected to my children’s future.”

The mother said her huge wish in her life was to see her children to getting education in a peaceful environment.

She urged the warning parties to bring the ongoing conflict to an end and declare lasting peace in the country so the wounds of millions of people could be healed.

Halima said she knew her young son had been killed by the Taliban and she was reading to forgive the Taliban for the sake of peace in the country.

She believed peace was more important than eating and drinking because war confronted her enter family’s life with difficulties. “I know very well the war consequences.”

Halima said she kept her hope for peace alive as it would end difficulties of millions of people and children, including her, would be able to get training and education.

She said she prayed to Allah during the five times prayers not see a mother loses her children to the conflict.

She said her hope increased after hearing about latest peace efforts and development and nowadays she gave more time to listening radio. She again called on the warning parties to declare lasting peace.

The United States and the Taliban signed a historic peace deal in the Qatari capital Doha on Feb 29 this year after years long hectic negotiations.

Under the deal, the Afghan government has to release of 5,000 Taliban prisoners and the Taliban have to free 1000 prisoners.

Initially the government refused to release Taliban prisoners but later the president signed decrees on releasing the prisoners.

More than 3100 Taliban inmates have been freed by the government so far, while the rebels also released up to 600.