KABUL (Pajhwok): Laila was alone in her room, mixing colors to make painting that depict the long wish of her country’s people “peace” and give a message to protect the buds of peace from the danger of war and warmongers.

Laila Salehi, a graduate of literacy, lives with her father, sister, a brother and sister-in-law in Qala-i-Zaman Khan area of capital Kabul.

She is working for peace using her brush and the art of painting which she focused more on ending the war in Afghanistan following the landmark peace deal between the US and the Taliban.

Salehi is now working on a piece of art, “This will show an environment of peace where children go to school. God fulfill this wish of our people.”

A teacher of literacy at Abul Qasim High School in Kabul, Salehi said she was interested in art since childhood when she would depict games of children in her younger age and later she focused on other aspects of life.

However, war, violence, migration and casualties caused by these issues encouraged her to share the message of peace and acceptance through her art in public.

She has so far made around thousand paintings mostly about peace and violence against women.

Salehi said she loved more her art works about peace because she felt happy playing a role in bringing about peace to the country and ending the war by sharing her messages to people. 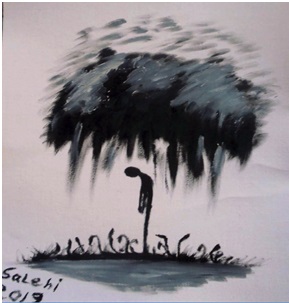 “When I paint, I feel very happy because I can depict the pain of our people or our women with the help of painting,” she said.

She pointed to another piece of her work and said, “War affects the earth like drought, it destroys beauties and weakens people like an unwatered tree.” This woman and her family like other Afghans are affected by the war,” she said, looking at the painting.

When Pajhwok Afghan News asked about the impact of the war on her own life, her eyes filled with tears and said

“Most of Afghan families are affected by the four decades of conflict, we are also part of this soil, we suffered problems, my elder brother lost his leg in a rocket strike during the government of Dr. Najibullah, we migrated to Pakistan. We also suffered huge problems during migration and the suffering of being away from our country.” 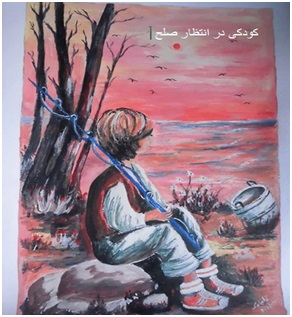 Salehi was repeatedly praying to God for peace in Afghanistan and said the conflict still threatened the lives of Afghans.

“Most of people who go out of their homes do not feel safe, I also carry many fears when I go out of home, I fear a suicide bomber and robber, I also fear that my family members would be kidnapped in the city,” she said.

However, recent peace efforts have given birth to hopes. She said she was very happy when the peace deal was signed between the Taliban and the US.

“I was very happy that I cannot explain, I also hope a similar agreement would be signed with the government and a permanent ceasefire will be agreed and people would no longer hear the sound of rockets and firing,” she said.

Salehi said continuation of attacks after the -day reduction in violence did not make her disappointed. “These problems exist, but we are hopeful because peace talks still going on and the Taliban, the US and the government are trying for a stable peace in the country, these efforts would lead to lasting peace in the country God willing,” she said.

She said she was working on a plan to portray the situation of post-peace Afghanistan.

“I think it would be a beautiful and good atmosphere, no woman would have fear of losing her husband, brother and children, men and women would continue their life in a safe environment, I will paint images of development of the country,” she said.

In response to a question about women’s lives after peace, she said, “It is difficult to comment about women’s livelihood in future, because it is unclear which freedoms will be taken away from women or what good things will happen in our lives, but we can say that the war has tired us, we should say the Afghan women want the rights that Islam has given them like right to work, education and others.”