KABUL (Pajhwok): Here is a man who lost two sons to last year’s devastating attack in the Shah Shaheed neighbourhood of Kabul. Several of members of his family were wounded and his house ruined by the powerful bombing. 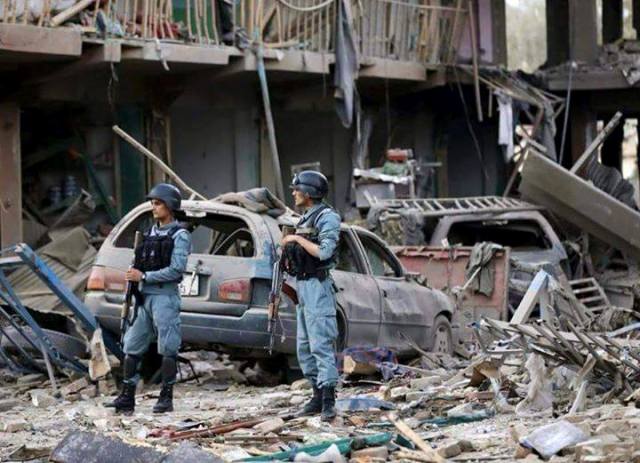 In what the government calls compensation, Mohammad Zahir’s family was given some financial support after the midnight explosion on August 7claimed 16 lives. Nearly 500 people were wounded, a whole market and hundreds of houses damaged. No group has so far claimed responsibility for the attack.

Seven months on, the tumble-down houses are still awaiting reconstruction, with the destroyed buildings grimly reminding passers-by and residents of theabhorrent terrorist attack.

As tears rolled down his cheeks, Mohammad Zahir told Pajhwok Afghan News: “Two of my sons were martyred and two others wounded along with their two sisters. Our house was flattened, but the government paid us only 200,000 afghanis. Is it the price of my sons’ lives?”

As this Pajhwok scribed entered his shop, the 70 years old shoemaker struggled holding back his tears while looking at the photographs of his sons hanging against the wall. The shoes made by his martyred son, Massoud, were displayed in a corner of the shop.

In a matter of seven months, he has become pretty pale and frail, the proverbial shadow of his former self. At the funeral of his children, the man looked quite strong, but now he is dishevel and has gone grey.

He could retrieve nothing from the rubble of his house save his daughter-in-law’s pink footwear -- something of a keepsake for the agonised soul. The shoes have been placed on a shelf

Pointing with a trembling hand to the photographs of his sons, the man laments the loss of Abdullah and Massoud. One of his foursurviving sonslivesabroad. Abdullah was 23 years old, a private university student who was also part-time mathematics teacher at the Ahmad Shah Abdali School.

Zahir remembers Abdullah as an honest,mild-mannered, well-humoured and upwardly mobile man. Whenever he returned home after day-long toil, the young man would share a jokeor two with his siblings and parents -- just to give them a tad bit of comic relief. 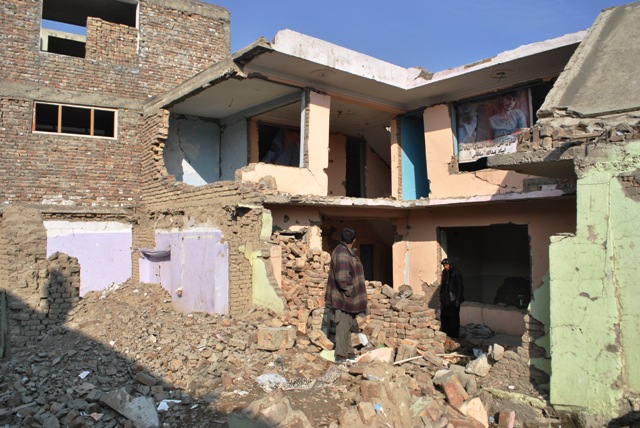 Always concernedat the deteriorating security situation in his homeland, Abdullah had made up his mind to go abroad and continue his education there. He had even arranged for his passport.“But we engaged him to a girl,” the distraught father says, crying uncontrollably.

Standing close to the photograph of his second son, Zahir says Massoud (35) is survived by two children. One of his sons was born a few months after Massoud’ death.

“Little did my son know he would say goodbye to the world in the midnight blast. The last smile that played across my son’s visageis his memory haunting me.”

Following the explosion,Zahir scrambled to come out of his room. Shards of glass hurt his forehead, but he did not feel any pain as he saw Abdullah lying beneath heavy wall stones and corpsehis second son in front of the door.

“Abdullah was alive till reaching hospital. I remember his last words, asking for water,” Zahir continues. When he returned home to see other family members, a friend (Zabeeh)informed him on the phoned that Abdullah had succumbed to his wounds.

On seeing the dead bodies of two sons, Zahir’s spouse fell to the ground. Given the massive shock, she has lost her mental balance. While telling her woebegone tale, the woman breaks down into tears and involuntary giggles.

“Even if we protest or request the government; no one is concerned about us. The chief executive officer visited the area and pledged rehabilitation of the locality. But barring a tent, a sack of rice and 200,000 afs in cash, the government has given usnothing,” Zahir adds.

Currently, he is living in a rented house in the Bagrami district of Kabul. He has no firewood to burn for heating his house in the harsh Afghan winter. Every Afghan will be left grieving if the government fails to control the situation, he warns.

“We don’t know what the future holds in store for us? They should explode another bomb to kill us all,” remarks the desperate man, who lambastes the government for ignoring the victims.

Dozens of reporters, including foreign journalists, have interviewed the survivors and made video of the site.High officials have held out pledges of compensation, butconcrete rehabilitative steps are yet to be initiated, he grumbles.

Abdul Hakim, a maternal uncle of the two men, also pans the authorities for paying no heed to alleviating the predicament of the victims’ families. Paying 100,000 afs for the loss of each person is an inadequate measure to meettheir households, he comments.

“Wehave lost everything to the blast – our loved ones, cash and properties,” says Hakim, who deals in spare parts. His eldest son and two nephews earned 3,000 afs each and fled home. The shopkeeper doesn’t know whether they are alive or dead.

While asking the rebels to renounce their armed campaign, he says: “Only poor people are victims of the war. Governmentfunctionaries don’t sufferat all. Their children are living in foreign countries. The shellsyou fireoften miss the target; insteadthe innocent people are killed and maimed.”

If the government does not help them, they will have no option but to leave the country, Hakim warns, accusing security officials of making false promises to avoid protests.And when the victims staged a rally, police opened fire on them, injuring a son of Mohammad Zahir.

Just like the government, the Afghanistan Independent Human Rights Commission also condemned the incident, asking the security organs, militants and warlords to spare the civilians.